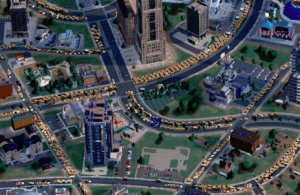 A travelling band of trouble makers have been terrorizing the streets of Simsville, according to a Simsville Police Department spokesperson.

All day long, Simsvillians have been reporting weird events happening all around the city. Lupus Deines, turtle tamer at Simsville zoo, reported seeing fleets of taxis swarming the streets of Simsville. “It was a sea of yellow as far as my eye could see,” said Deines. Deines was blinded in one eye in a turtle taming accident.

Jessenia Heywood had an even weirder report. Calling into our hotline, Jessenia had this to say: “The trees, they are making honking noises, I don’t believe it!”

Noella Constable, mother of six and professional Rubik’s Cube juggler, was right on the nose when she told us of a weird smell coming from the ferry terminal. Police later reported that someone had vandalized the ferry terminal’s sewerage system, and the smell was from the brown goo that was spilling freely into the corridors and offices of the terminal.

And these were just a few of the hundreds of reports The Bugle has received the last 24 hours. Other reports include plumes of noxious pollutants wafting over random areas of the city and unexplained fires that cannot be put out.

With so many unexplained happenings all around the city, Simsville’s well funded police force sprung into action and quickly identified the culprits. Speaking at a press conference this afternoon, police spokesperson Helco Weatherly explained the situation to the waiting press:

“It is our believe that a travelling bad of mischief makers have embarked on a terror campaign in Simsville. They have hacked into the city’s taxi dispatch system, placed speakers into the city’s trees, and committed acts of vandalism leading to the unfortunate effluent spillage at the ferry terminal. We are aware that the pranks, sabotage, vandalism, and inappropriate street art installations that this group is responsible have alarmed many Simsvillians, and we urge Simsvillians to stay indoors and stay calm. Your police force is actively investigating all reports and we will use our full resources to end this reign of terror as soon as possible.”

We will update this story as more information becomes available.