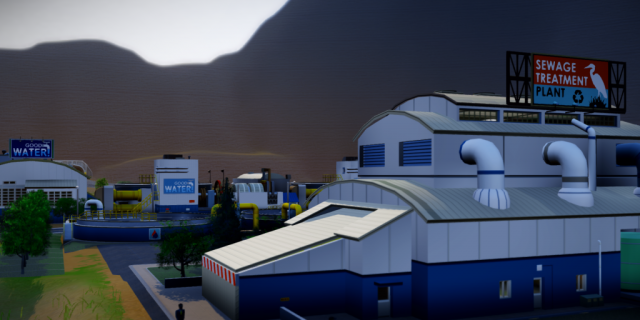 A disturbing rumor has been making the rounds on the Simsville subreddit of the popular Internet forum Reddit: our water comes from our poo!

An user posting under the pseudonym ‘fancymonkey2012’ claims he’s an insider inside Mayor Peter Less’s office, and was privy to the details of a secret meeting earlier this year at which the city’s water problems were discussed. With ground water quickly running out, a drastic plan was put into action, according to the more than ordinary monkey. The plan? To turn our sewerage into drinking water!

And to think that most thought the rationale behind the decision to build the city’s new water pumping station right next to our main sewerage processing plant was mostly related to town planning, by placing undesirable buildings as far away from Simsville numerous NIMBY types. Perhaps there is a more sinister reason at play here.

“It certainly sounds plausible, and I’ll definitely be drinking bottled water from now on,” posted ‘nakedpanzda’, who claims he is a water resource engineer currently employed in the private sector and so has no inside knowledge of the pee-to-water conversion controversy.

My cat, usually the pickiest of drinkers, certainly hasn’t detected anything wrong. But as a long time connoisseur of tap water, I don’t know what the truth is, and perhaps I don’t want to know. All I know is that something certainly doesn’t smell right!

Robert Mudge is a graduate of Simsville University, and Internet editor for The Bugle. He currently lives in the suburb of Hill Shadow, and lives with his cat, Smiggles.
View all posts by Robert Mudge →
Tweet Pin It