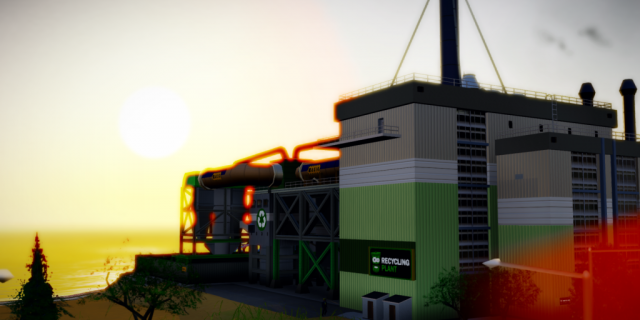 Simsville’s prized recycling center, only opened three month ago, has ground to a halt due to a mysterious malfunction that have stumped engineers trying to fix the problem.

The brand new facility had only been operating for a short while before the the processing plants stopped working, and they haven’t worked since. The recycling center converts recyclables into re-usable materials, including plastic and alloys, needed for Simsville’s fledgling processor manufacturing sector.

“We had been relying on a steady and cheap supply of alloys and plastics from the recycling plant, but now that we’ve had to import these raw materials, our margins have shrunk considerably, and that’s before you consider the logistic problems related to importing these materials,” Rodriguez added.

Simsville Recycling Co., the publicly owned entity in charge of managing the recycling center was unable to provide additional information on the plant’s closure. “We are still investigating all options at the moment,” said the company in a statement to The Simsville Bugle.

But an engineer who works at the plant, who wished to remain anonymous, has revealed some startling facts about the breakdown to The Bugle.

“The problem all started when Simsville Recycling Co. thought it would be a good idea to import the collected recycling from other cities in the Whitewater Valley region, as a way to offset the high cost of operating the plant. It may sound silly, but I suspect Whitewater Crossing’s recycling must somehow be incompatible with Simsville’s, and that’s causing these bad recyclables to cog up the entire line,” the engineer told us.

And the solution to the problem, the engineer says, might be drastic. And costly.

“At this moment, the best idea floated around by senior management is to bulldoze the entire plant and rebuild it, which seems drastic if you ask me,” explained our anonymous source, as he preferred an alternative method to fix the problem known in engineering circles as PATCH 2.0 (PATCH stands for Precision Automated Technique for Computerized Hydraulics, the 2.0 edition of which uses high pressure water and a series of hydraulic pumps to clean and restore reclamation lines to their original conditions).