Opinion: Universities Are Great, But So Are Grade Schools And High Schools 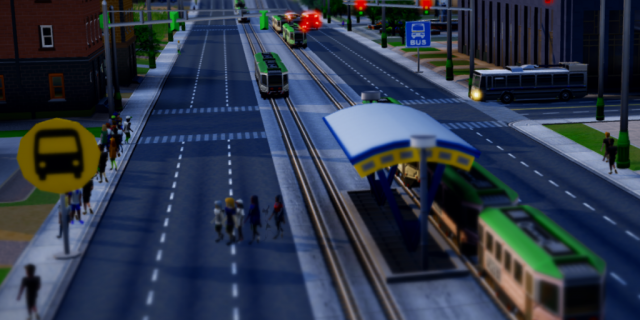 When it was revealed last month that an average Simsvillian had to wait 78 minutes to board a streetcar, something didn’t seem quite right.

With city auditors scratching their heads and wondering what the heck was happening, Simsville’s privately owned public transport company, SimTransCorp, launched their own investigation into what was going on, and discovered something quite nefarious: our city’s homeless are the ones to blame!

When Simsville auditors marched onto the streets and streetcar stops to calculate the average waiting time for streetcar stops, a bi-annual requirement set by the city that has to be met by the privatized SimTransCorp, auditors observed people waiting at stops and quietly measure how long they’ve waited. What they didn’t realize at that time was that some of the city’s homeless had taken to use the weather shielded streetcar stops as a temporary home. Instead of discounting these unwanted occupiers, inexperienced auditors, many of them dropouts from the city’s now closed high schools, counted these long term stayers as streetcar passengers. What was an average wait of 20 minutes, now soared to 78, as auditors counted these “patrons” as waiting at stops for 8 hours or more.

A re-survey conducted last week, which discounted the occupiers, found that the average waiting time was only 18 minutes, a respectable result.

The Bugle went to one of these occupied stops and talked to an middle-aged man who goes by the name of “Stabby” Joe. When we asked “Stabby” how he ended up being the cause of the city’s transport “crisis”, “Stabby”, who also goes by the name of Kenneth, told us his story more than willingly. “Well, one day I was getting off a tram from a hard day’s work, and for some reason, I felt compelled to stay at the stop, unable to get back home. This is my home now. Do you have change? Why are you staring at me? You’re burning my brain! Arghhhhh,” said Kenneth, suggesting that he may very well be a sufferer of Landlockia.

As reported a few months ago, a similar school bus crisis emerged when a bus driver at Simsville High managed to get himself and his bus stuck at the unloading terminal, causing massive disruptions to students trying to get to and leave school. The bus driver was diagnosed later on as a sufferer of Landlockia, a condition in which people feel stuck at one particular location for no good reason.

Medical Info: If you ever feel that you’re stuck at a streetcar stop, or any other location, please call emergency services and report your condition. A condition called Landlockia exists where people may feel they are unable to move from a location. The condition is incurable, but can be alleviated with timely medical assistance.

Harold Bowman yearns to one day visit space by enlisting at Whitewater Valley's Space Center. Before that happens, he is a staff writer for The Bugle.
View all posts by Harold Bowman →
Tweet Pin It