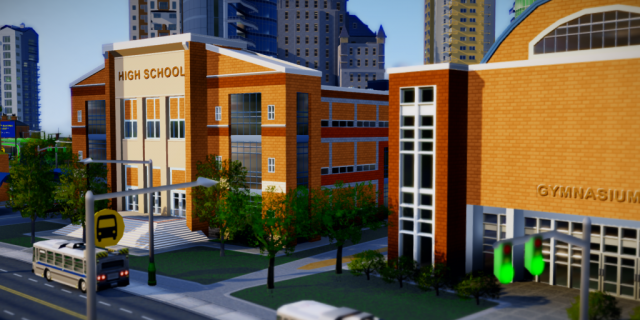 Most of Simsville was in shock when Mayor Peter Less announced the immediate closure of all grade schools and high schools, both as a budget measure, as well as part of a new experimental education reform. It seems that the only way to get an education in Simsville from now on would be via the city’s only University.

While the lush surroundings of Simsville U, and it’s magnificent acres that seem to occupy half of the city in its spaciousness, offers plenty of extra seats for all of the city’s students, young and old, and the education offered is of high quality, one wonders whether today’s children will miss out on all the extras that are offered via the typical schooling route of grade school and then high school.

Not so, says Mayor Less. According to detailed studies commissioned by the mayor’s office, we’re told, there’s absolutely no downside to having just a single university to cater to all educational needs in the city. Graduates will be smarter, and be well versed in the latest technologies, we’re also told. 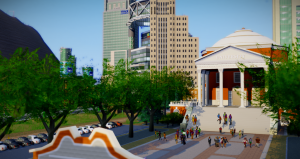 But what about finger painting? Storybook reading? Crooked pottery making? And where are the skip ropes? The games of “it”? Dodgeball? The very notion of learning via playing, and even recess, is under threat from a university curriculum that looks daunting for a 26 year old, let alone a 6 year old.

Of course, I’m speaking from my own background in education (as a high school teacher of 15 years), and so I may be biased, because for now at least, Simsville’s parents seem willing to go along with the experiment.

“Education is time consuming and costly, so if my six year old can graduate before he gets his first pimple, then I’m all for it,” said Lois Orton, the mother of Johnny.

While the Ortons appear to be fully supportive of mayor Less’s cost saving initiative, Lois did have one complaint. “Without school buses, the drive to the university can be a bit hectic. Sometimes the traffic is so bad, I have to turn back and let Johnny stay at home, all uneducated, for the day. Traffic all around the city during the morning and mid afternoon appears to be a lot worse than before,” noted Mrs Orton.

In my opinion, traffic may be the least of Simsville’s problems when it comes to this new education regime.

Leticia Lemos is The Bugle's education editor. Having been a high school teacher for 15 years before turning to journalism, Leticia knows just by looking at you if you're lying about the dog eating your homework.
View all posts by Leticia Lemos →
Tweet Pin It