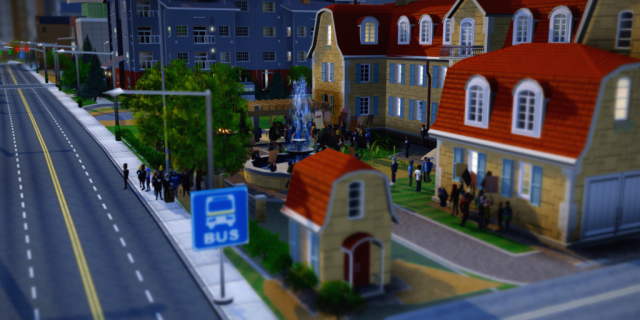 Mayor Peter Less’s 58th birthday party was ruined by protesters protesting a variety of issues, from the lack of parks, to high rent, and even sewerage problems.

A who’s who of Simsville turned out for the expensive looking event, including celebrity financial whiz Jeff Finley, host of the hugely popular Crazy Money show on CSBC, and financial editor of The Bugle. A champagne filled water fountain; an exquisite menu created by The Quint, Simsville’s Michelin rated restaurant; and a collection of exotic animals, including a turtle, a llama and even a cheetah, were all present.

Days before the event, unsubstantiated rumors spread online that the mayor’s celebration of himself was partially being funded by public money. In no time at all, a protest group calling themselves Occupy Simsville sounded a call to arms and asked concerned citizens to gather at the mayor’s mansion on his most special day. When asked what would be the main goal of the protest, Occupy Simsville spokesperson Sunshine Zuccotti responded: “It’s about the injustice of it all, the unfairness. It just doesn’t feel right, am I right? And so we must make ourselves heard. The Drum Circle has spoken!”

With goals unclear, all sorts of protesters turned out. Unemployed Roy Tarwater was there protesting the city’s traffic problems. “I might still have a job if I was able to made it to work before 1pm,” said Tarwater. Environmentalist Stacy Price, holding a sign made from 100% recycled materials, wanted the major to spend more of the city’s cash planting trees. 34-year old and still living at home Archibald Burkhalter was there to demand some answers from Mayor Less. “I read on Reddit that our water comes from sewerage, and I demand answers,” said Burkhalter, while wearing a tin-foil hat.

Despite the newly installed guard post, protesters eventually made their ways onto the grounds of the mansion. For some reason, the police did not intercede.

Protesters vowed to stay beyond the party, with one Occupy Simsville organizer saying that the protesters will occupy the site until all of the city’s problems are solved.

The event was held at the mayor’s mansion, in itself a controversial building. Built and maintained with public money, many questioned the need for such a stately residence for our mayor, especially when the city had already provided mayor Less with a fully paid-for house in one of Simsville’s leafy suburbs.

One thought on “Mayor’s Birthday Party Ruined By Protesters”